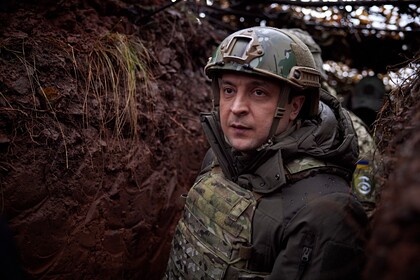 … This was reported by the press service of the head of the republic.

During his working trip to Donbass, Zelensky visited the forward positions of the Armed Forces of Ukraine (AFU) in the area of ​​the Joint Forces Operation (JF) and congratulated the Ukrainian military on the Day of the Ukrainian Armed Forces. The President presented them with gifts, and five soldiers were awarded state awards.

It is noted that during the trip, the head of state also got acquainted with the operational situation in the JFO zone and examined the command post of one of the brigades of the Armed Forces of Ukraine.

Earlier, in his congratulations dedicated to the 30th anniversary of the creation of the Ukrainian army, Zelenskiy spoke about its centuries-old history and announced the readiness of the Armed Forces of Ukraine to stop any enemy who made plans to seize the country.