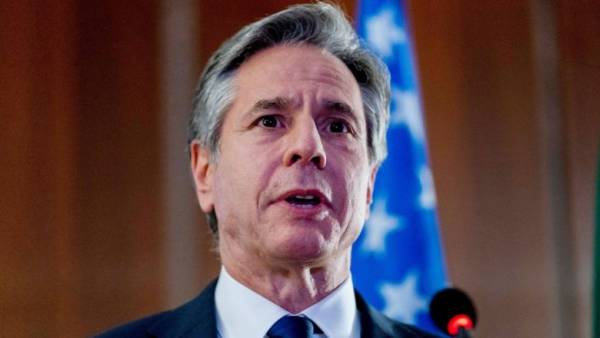 WASHINGTON, December 6 & nbsp;/TASS /. US Secretary of State Anthony Blinken hopes that & nbsp; Russia will choose to de-escalate the & nbsp; Ukrainian issue and & nbsp; withdraw its troops from the & nbsp; border. He made the corresponding statement on December 2 & nbsp; in an interview with Swedish television, the transcript of the conversation was circulated on Sunday by the State Department press service.

“ I & nbsp; very much hope that & nbsp; Russia will prefer to take the & nbsp; path of de-escalation, withdraw its troops and & nbsp; use diplomacy over & nbsp; existing differences '', & nbsp; & mdash; he said, summing up his meeting with & nbsp; Russian Foreign Minister Sergei Lavrov on the sidelines of the meeting of the OSCE Council of Foreign Ministers, which took place on & nbsp; Thursday in & nbsp; Stockholm.

The head of the American foreign policy department added that & nbsp; the United States is ready to help in & nbsp; this issue, in & nbsp; in particular, in & nbsp; promoting the implementation of the Minsk agreements, which, & nbsp; Blinken said, “ could become a way for & nbsp; resolution of contradictions in & nbsp; Donbass or Eastern Ukraine & nbsp; .

In addition, in the & nbsp; course of the negotiations, Blinken wanted to make it clear to Mr. Foreign Minister Lavrov that & nbsp; if Russia commits any act of aggression against Ukraine, then & nbsp; this will lead to & nbsp; serious consequences '', the & nbsp; transcript says.

The US Secretary of State also believes that the & nbsp; threat to & nbsp; Ukraine from & nbsp; Russia is & nbsp; very serious.