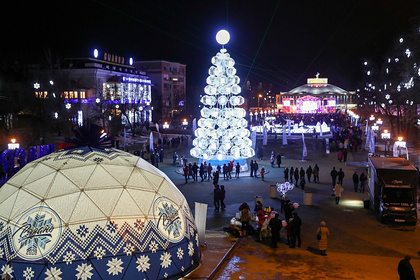 More than two hundred events and will install three art objects on the eve of the holidays. This is reported by the 62INFO.RU portal.

According to the publication, Christmas trees are already being installed on the streets of the city, there will be 35 of them in total. From December 10, light illumination will start working in parks and playgrounds. In addition, New Year installations will appear in the Kremlin Square and on Lybidsky Boulevard, and a dynamic light-dynamic winter fountain will be launched on Victory Square.

The celebrations will officially start on December 25 with an event called “Action 2.0.22”, which will include presentation of the protagonist of this holiday, Zabava Putyatishny.

In addition, the Ice Sculpture Festival will take place on January 3-8 on Lybidsky Boulevard. Five famous sculptors with their teams will present their works there.

Earlier in December, the Russians were named the best cities in the country to celebrate the New Year together. The most popular city was Yalta, and the second place in the ranking was the resort town of Sochi.