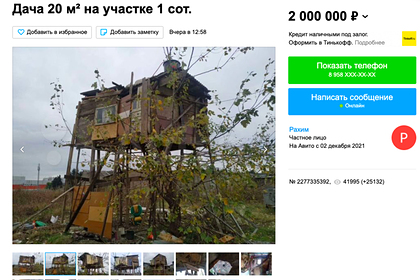 for sale a plot of land with a house, which the owners described as “a refuge for real men.” The announcement was posted on the Avito platform.

The announcement appeared on Sunday, December 5th. The building of wooden panels and planks is fixed on high metal supports, the area of ​​the site is one hundred square meters. The property was estimated at two million rubles, the owner noted that there were no documents for the house. Separately, it costs 125 thousand rubles.

Inside the building there is one sleeping place and a cooking area with an electric stove and a kettle. You can climb inside by using a ladder through a hatch; the seller suggested going down by a rope. “There is a place for barbecue and parties under the house. There is electricity and running water, ”the announcement says. According to the owner, the windows overlook a wheat field, and you will have to walk 950 meters to the sea.

An assistant to the seller commented on the appearance of the advertisement in a conversation with Rossiyskaya Gazeta. He noted that the owner was not mistaken in the price. “This is not a fake. Finances are needed for the following small buildings from 20 to 50 centimeters in height, “the man explained.

In November, in Barnaul, on Gushchin Street, for 4.5 million rubles, an apartment with” unique interiors from the 90s was put up for sale. “. The living area was filled with bulky furniture, carpets and paintings in gilded frames. Netizens left a lot of snide comments on the news about home sales.