Political scientist Pogrebinsky: the key factor in the collapse of the USSR was the rejection of the leading role of the CPSU 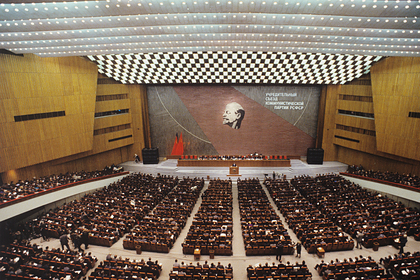 One of the key factors that led to the collapse of the Soviet Union, was the rejection of the 6th article of the Constitution of the USSR, which consolidated the leading role of the CPSU. In a conversation with Lenta.ru, a political scientist, director of the Kiev Center for Political Research and Conflictology Mikhail Pogrebinsky spoke about this within the framework of a special project dedicated to the 30th anniversary of the collapse of the Soviet Union.

“The Communist Party of the Soviet Union played the role of the only institutional bond, glue , without her it was already impossible to keep the country from collapse, “Pogrebinsky said.

In his opinion, the abolition of the leading role of the CPSU is the very case when” they aimed at communism, but ended up in Russia. ” p>

Earlier, in a conversation with “Lenta.ru” political scientist Oleg Dolzhenkov called the attempt to preserve the USSR and create the Union of Sovereign States (UIT) in 1991 “an agony passed off as childbirth.” According to him, during the negotiations on the signing of the Union Treaty in 1991, all the participants in the “Novoogarevsky process” pursued their own goals, and no one knew what the new confederal state should look like.

On March 14, 1990, a law was adopted “On the establishment of the post of President of the USSR and the introduction of amendments and additions to the Constitution of the USSR.” Article 6 of the USSR Constitution on the leading role of the CPSU was abolished. After that, a struggle between factions unfolded within the party, which weakened the control of the center both over the allies and over the union republics.