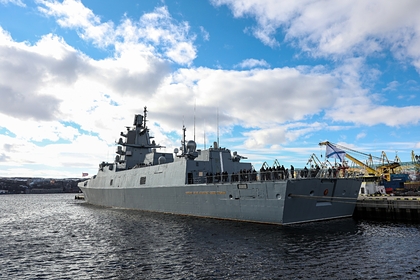 Russian frigates of project 22350 Admiral Gorshkov “received an anti-aircraft missile system (SAM)” Polyment-Redut “. It will allow hitting at the same time not only air, but also sea targets. The Russian Navy (Navy) has already completed tests in which they practiced the destruction of enemy surface ships, writes Izvestia.

According to Izvestia sources, the tests took place over several years and ended at the end of autumn 2021 year. Russian frigates received new opportunities: the Poliment-Redut air defense missile system was placed on the frigate Admiral Gorshkov as part of the Northern Fleet. The ship's crew worked out the launches of an anti-aircraft guided missile (SAM) and actions during such strikes.

It is noted that during the tests all targets were hit, and the work was called successful. Strikes against naval targets were carried out using several types of anti-aircraft missiles, but their specific names were not disclosed. Air defense systems can add the ability to fire at sea targets, says military expert Dmitry Boltenkov.

“During clashes, a universal anti-aircraft missile will enhance the striking power of frigates and save expensive ammunition. The frigate will not need to spend “Zircons” or “Calibers” to destroy small warships or boats of the enemy – it would be more reasonable to sink them with the “Polyment-Reduta” anti-aircraft missile. There have already been such cases, ”explained Boltenkov.

Earlier it became known that“ Admiral Gorshkov ”hit a target in the White Sea with the help of“ Zircon ”. The shooting was successful, the Defense Ministry stressed.