Rospotrebnadzor: the first cases of omicron-strain were detected in Russians who arrived from South Africa 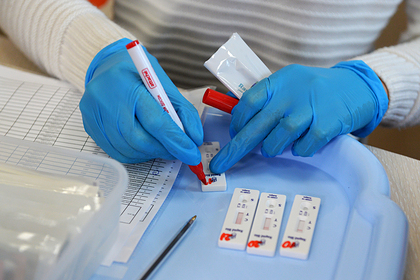 coronavirus. This was reported in Rospotrebnadzor, reports TASS. These are the first officially confirmed cases of a new strain in Russia.

The department clarified that earlier patients had passed a PCR test, the result of which was positive. However, the original strain of the coronavirus that the tourists contracted was unknown.

Coronavirus was found in 10 more Russians who flew in from South Africa All citizens who return from South Africa and border countries are tested at the border upon arrival, after which they are placed in special observators, where they are under the supervision of doctors.

On December 5, the department said that nine people had a positive PCR test for coronavirus, the strains have not yet been identified. As the source of Izvestia clarified, there is a pregnant woman with a child among those infected.

Earlier, a Russian woman who returned from South Africa told about the infection with the omicron strain. She reported that she had a fever all night, a very bad cough and a sore throat.

There is no official confirmation of this information. Press Secretary of the Russian President Dmitry Peskov suggested not focusing on media publications.

According to Peskov, the headquarters “has done work, everything is working” – this is how he answered the question whether proposals have been prepared on the current situation.

The President Russian Vladimir Putin instructed the Cabinet of Ministers to develop a plan to combat the new strain of coronavirus, setting a deadline until December 7. Prime Minister Mikhail Mishustin has been appointed responsible.

According to the Deputy Chairman of the State Duma Health Protection Committee Alexei Kurinny, so far nothing terrible has happened, since the tourists arriving from South Africa are in quarantine and isolation, due to which the infection does not spread. The MP noted that the later the new strain comes to the country, the more opportunities to prepare, therefore its appearance is “not very cool.”As Vitaly Zverev, academician of the Russian Academy of Sciences, scientific director of the Mechnikov Research Institute of Vaccines and Serums, Vitaly Zverev said in a conversation with Lenta.ru, delta has become the predominant strain in about six months.

So far, no country has replaced the omicron strain , which ran there before, so we still have no reason to believe that it will become the main one

Vitaly Zverev, Academician of the Russian Academy of Sciences

Zverev pointed out that, according to WHO experts, the omicron strain is much softer than the delta.

According to virologist, Doctor of Medical Sciences Anatoly Altstein, the coronavirus pandemic could end in 2022 if the omicron strain turns out to be less pathogenic than delta. He noted that vaccination will help to combat its spread.

Omicron-strain is detected in vaccinated travelers from other countries

On December 3, it became known that the omicron-strain was detected in a fully vaccinated 60-year-old tourist from Greece, he arrived from South Africa to Crete through one of the European countries. According to the latest data, he is in quarantine with mild symptoms.

On December 5, the first case of infection with the omicron strain was detected in Argentina, and the infected one was also fully vaccinated against COVID-19. The country's Ministry of Health clarified that the tourist returned from South Africa through the United States.

At the moment, a new omicron strain has been identified in about 20 countries around the world. The World Health Organization does not exclude that omicron is able to displace other strains and in the near future half of patients in Europe will be infected with this particular option. At the same time, the organization's specialists came to the conclusion that those infected with the new strain carry COVID-19 in a milder form.