BP CEO Bernard Looney: Rosneft's specific emissions are lower than those of the British company 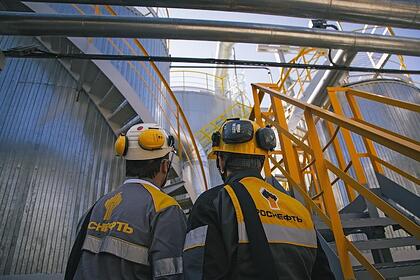 Rosneft's specific greenhouse gas emissions today lower than BP, said the chief executive officer of the British company Bernard Looney. “You will be surprised to hear that Rosneft has a lower GHG emission rate per barrel of oil than BP. They have a plan to achieve zero routine flaring of associated petroleum gas. They are cutting emissions now, ”he said in an interview with the American edition of Time.

BP is a strategic shareholder of Rosneft; it owns 19.75 percent of the Russian company. The board of directors of Rosneft from BP includes two representatives – Looney himself and the former head of the company Robert Dudley.

In his interview, Looney said that the participation of the British company in the capital of Rosneft provides BP with about a third of hydrocarbon production , or about 1.1 million barrels of oil equivalent from 3.27 million barrels of oil equivalent (data for 9 months of 2021). In January-September 2021, profit from BP's participation in Rosneft's capital amounted to $ 1.9 billion, providing 35 percent of the company's total net profit.

In October, during the Eurasian Economic Forum in Verona, Bernard Looney said that BP “is 100 percent committed to Rosneft, this is a wonderful partnership, and we are very committed to it.” He also added that, in addition to successfully developing existing joint projects, the companies are considering new opportunities.

Rosneft and BP are working together on emissions management. In February 2021, the companies agreed to collaborate on sustainable development and carbon management. The interaction includes an assessment of the prospects for new low-carbon projects, the use of technologies for capturing, utilizing and storing CO2, as well as the development of a hydrogen business and the development of fuels with improved environmental characteristics.

Successful cooperation between Rosneft and BP is also noted at the highest level. In April, at a meeting of the Russian Geographical Society, Russian President Vladimir Putin said that “Russia is satisfied with the way British BP and Rosneft are cooperating. Striving for carbon neutrality is the right, noble task. And I know that your company pays great attention to this and invests funds in research in this area. I know that your cooperation with the Russian “Rosneft” is proceeding very successfully, and the capitalization of your company, bearing in mind the reserves that are growing, including on the territory of the Russian Federation, has positive values. For our part, we are satisfied with the way this cooperation is being carried out, “the head of state emphasized, addressing the head of BP Bernard Looney.

Rosneft is the first Russian company to submit a carbon management plan until 2035 with clear targets to reduce greenhouse gas emissions. The plan includes: prevention of direct and indirect greenhouse gas emissions in the amount of 20 million tons of CO2-equivalent; reduction of the intensity of direct and indirect emissions in oil and gas production by 30 percent; achieving methane emission rates below 0.25 percent; zero routine flaring of associated gas.

Immediately after his appointment in 2020, Looney commended the partnership with Rosneft. “BP has a long and deep partnership with a Russian company,” he said. –— Rosneft has been publishing a Sustainable Development Report since 2006, and the evolution of this document can be traced to the present day. Rosneft has created a carbon management subcommittee. We have different starting positions, but one should not think that only in the West people are worried about climate change. We asked Rosneft to join the Principles for Reducing Methane in the Production Chain, and they joined, they are participating, they want to be part of the overall process. ”

“This is a two-way street. It is wrong to think that knowledge is transmitted only by us. Rosneft is the largest company that produces in harsh climatic conditions. We also learn from them. Dialogue is what is important, ”concluded the head of the VR.

Rosneft and BP are long-term partners. The companies have three joint ventures in Russia. OOO Taas-Yuryakh Neftegazodobycha, in which BP holds a 20 percent stake, is developing the Srednebotuobinskoye oil and gas condensate field in Eastern Siberia. OOO Ermak Neftegaz, established in 2016, conducts geological exploration in Western Siberia and the Yenisei-Khatanga basin. The share of Rosneft in the company is 51 percent, and BP – 49 percent. Within the framework of the Kharampurneftegaz JV (BP's share is 49 percent), it is planned to produce oil at mature fields and implement a gas production project.

In November 2021, a joint venture between Rosneft and BP – Ermak Neftegaz LLC – announced the discovery of a new field on the Taimyr Peninsula. The reserves of the field, which was named after the Hero of the Russian Federation Yevgeny Nikolaevich Zinichev, are estimated at 384 billion cubic meters. Experts call this discovery one of the largest in recent years.

“The discovery of a new gas condensate field in Taimyr, in the area being developed by a joint venture between Rosneft and British BP, once again confirms the unique oil and gas potential of the region. The State Reserves Commission has confirmed the discovery of a field with gas reserves of 384 billion cubic meters! One of the biggest discoveries in recent years! But just a few years ago, all sorts of experts were actively broadcasting that there was supposedly nothing of value in the depths of this region. Moreover, the head and co-owner of Lukoil Alekperov said in 2018 that the company would not continue drilling in the Vostochno-Taimyr area due to its futility. Indeed, “the road will be mastered by the one walking,” said Rustam Tankayev, General Director of InfoTEK Terminal.