A cat in Perm was diagnosed with a severe coronavirus infection, but doctors were able to save him 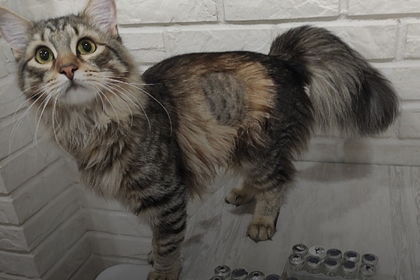 he defeated her. Doctors in Perm were able to save the pet. This was reported on the page of the Matroskin shelter in VKontakte.

In a post published on the social network, it is said that the cat had a hard time carrying the infection for 93 days. At the same time, the support from volunteers and veterinarians helped the young animal to cope with the disease, which became a “real victory” for him.

Local residents Ekaterina and Andrey took over all the treatment: they took the cat to the doctors almost every day. and also fully paid for all his therapy and also provided with expensive drugs. Blitz turned out to be a “golden cat”, as a large amount of money was spent on his treatment.

Based on the results of all the tests and ultrasound, it was decided to “go to the waiting area,” said the townswoman. According to her, during the treatment there were moments of joy and anxiety, the deterioration and improvement of Blitz's condition, but in the end he coped. “I am overwhelmed with emotions,” she said.

In conclusion, the Russian woman, on behalf of the cat, thanked the doctors for their professionalism. The pet is happy to live without “painful injections” and again “rush around like a hurricane around the apartment.” He was thrown to the builders of the Crimean bridge at the beginning of work. The animal did not leave people for all four years and was a witness to every process of the construction of the crossing. The legendary cat became one of the symbols of the longest bridge in Russia across the Kerch Strait, linking Crimea and Krasnodar Territory.

In early November, it also became known that an almost 22-year-old Siamese cat from Tyumen was in the Russian Book of Records. The hostess took him home back in 1997, that is, during the presidency of Boris Yeltsin.