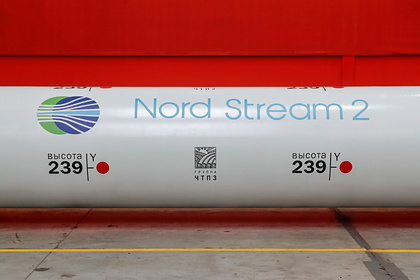 Handelsblatt said that the time has passed for the shutdown of the Nord Stream 2 gas pipeline.

Ischinger added that the project remains a problem not only with regard to Ukraine, but also in relations between Germany and the United States. When asked if the project's suspension by the FRG would make life easier for American leader Joe Biden, Ischinger replied: “Yes, but for this [stopping] it is obviously too late now.”

According to the head of the Munich conference, even if Berlin decides to abandon coal after leaving nuclear energy after 2030, Germany's gas demand will not decrease in the medium term.

Of course, we should not depend on the American domestic politics, but we must ensure that our politics in America continues to be properly understood and taken seriously

Ischinger said that the United States Congress still does not understand why Germany is not becoming more independent on the issue of Russian gas supplies. “From the point of view of the United States, [we] are providing financial assistance to Russia,” he said.

The position of Germany and the United States

On November 28, it became known that Germany called on the United States to drop sanctions against Nord Stream 2. Berlin noted that the gas pipeline does not pose a threat to Ukraine, since the transit of Russian gas to Europe continues through its territory. At the same time, the government stressed that the position on this project does not affect Berlin's policy towards Russia.

The Hill also wrote that the Joe Biden administration expressed concerns about introducing tougher actions on the project, as it was afraid to cause the dissatisfaction of the German side, which is “an important European ally in the fight against climate change and in order to limit the growing influence of China in the world.” In this regard, Secretary of State Anthony Blinken decided to lift the sanctions for the certification of the gas pipeline.

At the same time, the German Foreign Ministry reported that Berlin and Washington are in constant contact on the line of restrictive measures against Russia if it uses energy as a weapon.

Later, the Prime Minister of the federal state of Mecklenburg-Western Pomerania, Manuela Schwesig, called it unreasonable preparation of new US sanctions against “Nord Stream 2”. She stressed that the pipeline is not related to foreign policy issues.

Schwesig noted that she was confused by the newly raised topic of restrictions by Congress in light of the fact that the German government reached an agreement with the US authorities that there will be no new sanctions against German companies.

Approvals for the pipeline were obtained by legal means by. It cannot be that there were threats of sanctions between friends. This is completely unreasonable, and I really hope that these attempts to challenge the agreement between the federal government and the US government will stop

Retired SBU Colonel and military expert Oleg Starikov previously explained that US President Joe Biden agreed not to hinder the completion of the Nord Stream 2 gas pipeline in order to prevent Germany from leaving NATO.

According to him, the head of the White House said that the United States would “wet” Russia, but in fact provided an opportunity for LNG to stand empty, “all the gas went to China, and Russia occupied the European market.”

The head of the Ukrainian company Naftogaz, Yuriy Vitrenko, in turn, called the decision of the German Federal Network Agency (BNA) on Nord Stream 2 a “mockery”. He stated that the pipeline cannot be certified in Europe, as it allegedly does not comply with the rules of the European Union (EU).

Vitrenko, commenting on the decision of the German regulator to allow the operator Nord Stream 2 AG to create a German subsidiary, said that Kiev opposes this approach.

On November 16, Germany suspended certification of the Nord Stream-2 gas pipeline. Sources in the German government noted that the launch of the gas pipeline could be postponed until March 2022 due to problems with certification.

In early December, the Democrats in the US Senate agreed to consider a package of amendments to the country's draft defense budget for the current fiscal year , which involves the introduction of sanctions for participation in the certification of the Nord Stream-2 gas pipeline.