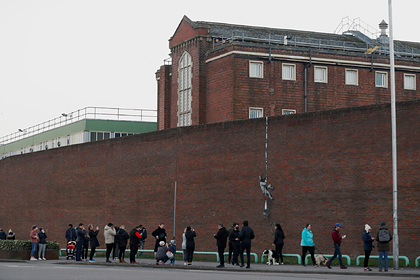 60 kilometers from London and turn it into an art center. To do this, he decided to sell a stencil of one of the works on the facade of the building for $ 13.2 million, writes The Guardian.

This is a creative escape graffiti depicting a man in a prison uniform walking down from walls on a rope tied from a sheet. Towards the end, the fabric turns into sheets of paper covered with writing, emerging from a typewriter.

Many suggest that this is an allusion to the famous writer Oscar Wilde – he was in Reading Prison from 1895 to 1897 for charges of homosexual relations with Lord Alfred Douglas. The stencil was displayed in a gallery in Bristol, Banksy's hometown, in December. The artist himself believes that the idea of ​​turning the place that broke the writer into a “refuge for art” is definitely worth implementing.

The prison building was built in 1844 and is considered an architectural monument of the Victorian era. In 2013, it ceased to function, since then the structure has been abandoned. They planned to sell the object to a private person, but the deal did not take place. In 2021, the Berkshire County authorities proposed converting the premises into an arts center, but this requires the purchase of the building from the UK Justice Department. Reading City Council tried to buy the building for 3.5 million dollars – the amount was not enough.

In November, in the English city of Lowestoft, another Banksy work was cut from the facade of the building. On the wall of an electrical store was a black and white image of a child in a Panama hat holding a crowbar. Workers removed the graffiti, placed a piece of the facade on the truck, and covered the empty area with wood paneling.