Political scientist: an attempt to preserve the USSR and create a confederation in 1991 was an agony 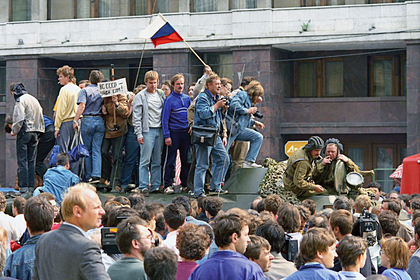 “Novoogarevsky process” pursued their own goals, and no one knew what the new confederal state should look like. Political analyst Oleg Dolzhenkov spoke about this in a conversation with Lenta.ru as part of a special project dedicated to the 30th anniversary of the collapse of the Soviet Union.

“Everyone seemed to be in favor, but in reality, consultations on a new agreement were not going shaky or fast. Everyone pulled in their direction: the republican elites, the President of the USSR Mikhail Gorbachev, the President of the RSFSR Boris Yeltsin. They tried to create a kind of phantom that does not fit into the head – a sovereign state, a subject of international law, which would also include completely sovereign states, subjects of international law. So nothing could have happened – and in the end, of course, nothing happened, “the political scientist said.

He called the attempt to save the country and create the Union of Sovereign States (UIT)” an agony passed off as childbirth. “/p>

Dolzhenkov added that the negotiation process was attributed to the successful attempt of the State Committee for the State of Emergency (GKChP) to take power over the intractable Ukraine. “Like, we all wanted the best, but the damned putschists and stubborn Leonid Kravchuk prevented us. Although, of course, there would have been some chance for some kind of unity if Yeltsin had shown a strong interest in Russia actually taking the lead in such an integration association, “he summed up.

Earlier, in a conversation with Lenta.ru, journalist Oleg Kashin said that the possibility of keeping the USSR by force was used up even before the all-Union referendum on March 17, 1991, during the suppression of rallies for independence in the union republics.

On August 18-21, 1991, events took place in the country, which were called the “August putsch”. Officials and state authorities regarded them as a conspiracy, a coup d'etat and an unconstitutional seizure of power. The GKChP that emerged in those days was opposed by the leadership of the RSFSR: President Boris Yeltsin and Vice President Alexander Rutskoi. At their call, thousands of people gathered outside the White House. An unsuccessful attempt by the State Emergency Committee to interfere with the “course towards the elimination of the Soviet Union” led to the failure to sign the renewed Union Treaty.