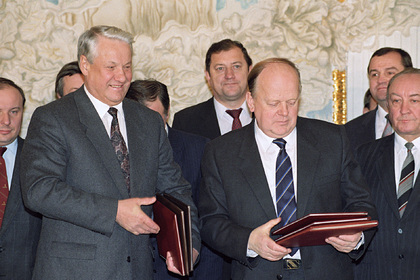 Former Chairman of the Supreme Soviet of Belarus Stanislav Belovich said. In an interview with Gazeta.Ru, he said that he was proud to put the first signature on this document.

According to him, the work on the agreement on the collapse of the USSR took place under a bottle of cognac. “And from this bottle we drank no more than 100 grams all together, and that still remained in the glasses,” he noted and explained that there were no snacks on the tables, since the food only interfered. Shushkevich added that then no one thought about extraneous things. “I myself am surprised to this day – we had some fantastic hobby,” said the ex-chairman of the Byelorussian SSR.

Shushkevich noted that on December 7, 1991, representatives of the still Soviet Russia, Ukraine and Belarus came to the conclusion that the USSR as a geopolitical reality and a subject of international law ceases to exist. “And on this“ bone ”, as Boris Nikolayevich Yeltsin called it, it was necessary to plant meat – that is, not to make anyone worry that someone’s rights would be violated,” the ex-chairman of the BSSR explained.

He clarified that then the task was to determine which political path should be followed. “And we decided (…) Declarations were adopted by all union republics, and these declarations served as the basis for the adoption of the Belovezhsky agreement on the creation of the CIS,” Shushkevich emphasized and noted that the experts worked on the document all night, and in the morning they presented an agreement from 18 articles. According to him, after the study, 14 articles and a preamble remained. The final version of the agreements appeared by two o'clock in the afternoon.

The Soviet Union collapsed after the conclusion of the Belovezhskaya agreements in December 1991 by the leaders of the RSFSR, the Ukrainian and Belarusian SSR, who divided a single state. During these events, Soviet President Mikhail Gorbachev refused to fight and was removed from power.