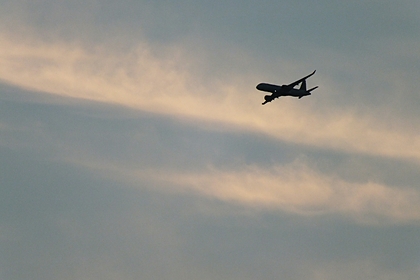 by a course plane over the Black Sea from behind a NATO aircraft. This was stated by a representative of the Federal Air Transport Agency, RIA Novosti reports.

The Russian aviation authorities will transmit the protest through diplomatic channels. As the interlocutor of the agency emphasized, flights of military aircraft without radio communication carry risks to the safety of civil aircraft in the Black Sea region.

The increased intensity of NATO aircraft flights near the borders of the Russian Federation, including over the Black Sea, creates the risk of dangerous incidents in relation to civil aircraft

The department also disclosed the details of the incident and confirmed that the Russian airliner, flying from Tel Aviv to Moscow, changed echelon because of the NATO CL600 reconnaissance aircraft. He performed a flight with an intensive descent from an altitude of 11,000 to an altitude of 9,200 meters, while crossing the routes of civil aircraft. The crew of the military vessel did not respond to repeated requests from the Russian airspace services.

The incident with a NATO military aircraft and a civilian airliner over the Black Sea took place on the morning of December 4. A US reconnaissance aircraft approached a passenger Airbus, which forced it to change direction to avoid convergence.

Related materials 00:02 – September 21, 2020 US budget killer tested “sixth generation fighter.” How does this threaten Russia? 00:00 – 23 February He will become the most armed fighter in the world

According to the air services, there was less than 20 meters between the planes vertically, so the dispatchers gave the command to the civilian plane to descend 500 meters and take a safer echelon. Later it turned out that the evasion from the military plane had to be done at an altitude of ten kilometers. The press service of the Aeroflot airline confirmed that the order for the civil aircraft to change the flight level came from the dispatcher. It was due to the fact that “the trajectory was crossed by another aircraft.”

After that, the Russian Foreign Ministry stated that the Russian military recorded flights of dozens of NATO reconnaissance planes and drones near the country's borders on a weekly basis. “NATO is purposefully testing us for strength by sending warships and aircraft to zones in the immediate vicinity of our borders, forcing Russia to react,” they noted. At the same time, all the measures that Moscow is taking in response to such provocations are adequate and restrained, the department stressed.