Daniil Medvedev on the victory of the Russian national team in the final of the Davis Cup: the tie-break decided everything 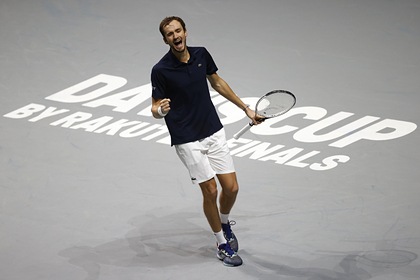 the national teams of Russia and Croatia became a tie-break in the first set. This commentary was given by tennis player Daniil Medvedev, who won the decisive match against Marina Chilich, on the Okko Sport air. The Russian noted that the decisive points were those that he managed to score, and not the opponent.

The Russian noted that the decisive points were those that he managed to score, and not the opponent. “Incredible emotions, I am much more happy for the team than for myself. At the same time, I am proud to have brought the winning point, “the Russian said.

Medvedev also noted Chilic's game and said that the last two weeks have been one of the most difficult in his career. The Russian stressed that it is always difficult to play at the end of the season.

The game took place earlier on Sunday, December 5th. The Russian athlete won in two sets with a score of 7: 6, 6: 2. In the first fight, Andrei Rublev also defeated Borno Goyo in two games.

The victory in the Davis Cup was the third in history for the Russian national team. The last time the team won the tournament was in 2006. The Russians took the title again in 2002.