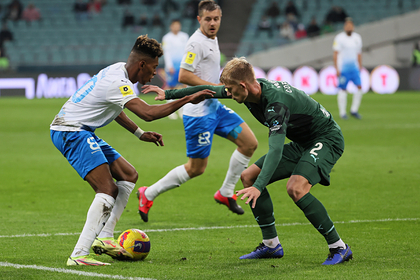 Football club Krasnodar defeated Sochi in the match of the 17th round of the Russian Premier League (RPL). This was reported by the Lenta.ru correspondent.

The meeting was held in Sochi and ended with a score of 2: 1 in favor of the guests. On the 19th minute, a goal from striker Mateo Cassierra put Sochi ahead. Then the bulls' midfielder Viktor Klasson scored a double, scoring a penalty in the 23rd minute and scoring a field goal in the 52nd. In the 86th minute, Krasnodar remained in the minority after midfielder Grzegorz Krychowiak was sent off.

After 17 matches, Krasnodar has 28 points and moved up to third place in the RPL standings. The team is nine points behind the leading Zenit. Sochi is in fourth place, behind Krasnodar in terms of additional indicators.

In the next round, Krasnodar will host Nizhny Novgorod on December 12, and Sochi – Spartak Moscow on December 13.