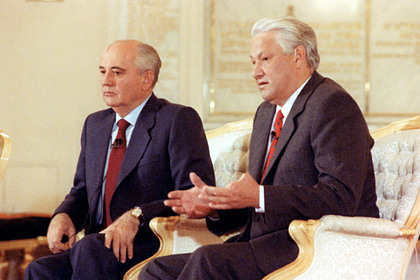 Michael Russia of Boris Yeltsin, which occurred after the signing of the Belovezhskaya agreements. Former President of Kazakhstan Nursultan Nazarbayev told about this in Naili Asker-zade's film “30 Years Without a Union”, RIA Novosti reports.

Nazarbaye recalled that he had received Yeltsin's invitation to visit Belovezhskaya Pushcha and sign an agreement on the collapse of the Soviet Union, but rejected it. Instead, he arrived in Moscow the next day, where he tried to meet with Gorbachev.

“In the morning I came at the appointed time, sat, talked, and after a while Yeltsin came in. Of course, Gorbachev says: “Well, what have you done? And what do you want? So, what will happen to nuclear weapons? What will happen to the united armed forces?” Yeltsin jumped out and said: “Are you arranging an interrogation for me?” – “I'm not arranging interrogation, I ask, answer.” “I'm not going to answer you,” Nazarbayev recalled.

After that, according to the ex-leader of Kazakhstan, Gorbachev reminded Yeltsin that he was still the head of the Soviet Union. Yeltsin agreed with this, but then said that it was he who would soon sit in Gorbachev's chair. “Then the skirmish began, swearing, in high tones,” Nazarbayev added.

In the meantime, State Duma Speaker Vyacheslav Volodin decided to find out the opinion of the audience of his Telegram channel about the reasons collapse of the USSR and launched a corresponding poll in the messenger. In his message, Volodin called the collapse of the USSR, which took place 30 years ago, a tragedy for the entire population of the country.