Naftogaz: Germany's decision on Nord Stream 2 is a mockery of EU rules 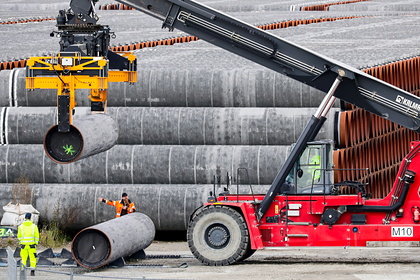 Head of Ukrainian Naftogaz Yuri Vitrenko called the decision of the German Federal Network Agency (BNA) on the Nord Stream 2 gas pipeline “a mockery”. This was reported by the Euractiv edition.

According to him, Nord Stream 2 cannot be certified in Europe, because it allegedly does not comply with the rules of the European Union (EU). Vitrenko, commenting on the decision of the German operator to allow the operator Nord Stream 2 AG to create a German subsidiary, noted that Ukraine is against such an approach. He noted that the certification of only part of the pipeline is a mockery of the EU rules. “And we hope that this will not happen,” the head of Naftogaz said.

In addition, Vitrenko added that the pipeline should be filled with alternative gas suppliers along its entire length.

Earlier, Nord Stream 2 was predicted to delay its launch this winter. Karel Girman, an energy expert and former member of the Strategic Group of Advisers for Supporting Reforms under the Ukrainian government, said that the gas pipeline will most likely not work due to problems with certification. “Today we already know that the controversial Nord Stream 2 gas pipeline, which goes from Russia directly to Germany through the Baltic Sea, will definitely not work this winter,” the specialist is sure. Girman added that the situation is exacerbated by Europe's weak preparedness for the winter, which is expected to be very frosty.