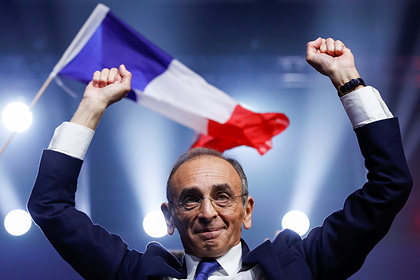 French presidential candidate Eric Zemmour attacked the first campaign rally in the Parisian suburb of Villepinte. This was reported by the BFMTV TV channel.

The video, published on the channel's website, shows how Zemmur, accompanied by security guards and journalists, moves through the hall to the podium. At that moment, an unknown man suddenly attacked him, running out of the crowd of spectators. In an attempt to knock Zemmur to the ground, he grasped the candidate's head forcibly. The guards detained the intruder and took him out of the hall. Now he is in custody for deliberate violence.

According to the police, the identity of the attacker is already known to law enforcement officers, he is associated with various offenses. The reasons for the attack are unknown.

Zemmur's nomination for the presidency of the Fifth Republic became known on November 30. He is known for being a radical rightist. Currently, more than 40 people are included in the list of candidates for the post of head of state, which will be held in France in April 2022.