EMERCOM of the Russian Federation: the bodies of two more dead miners were recovered from the Listvyazhnaya mine in Kuzbass 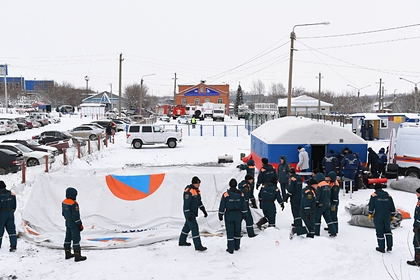 From the Listvyazhnaya mine in the city of Belovo area rescuers raised the bodies of two more victims. This is reported by TASS with reference to the EMERCOM of Russia.

“The mine rescuers of the EMERCOM of Russia continue prospecting work at the Listvyazhnaya mine in the Kemerovo region – Kuzbass. During them, on December 4, mine rescuers raised two more dead miners to the surface, ”the ministry said.

The day before, on December 3, the bodies of 12 dead were raised from the mine. The Governor of Kuzbass Sergei Tsivilev said that the paramilitary mine rescue units raised the bodies of 11 miners and one mine rescuer to the surface. 13 bodies of the dead remain in the mine.

A methane explosion in the Listvyazhnaya mine in the Kemerovo Region took place on the morning of November 25. As a result, 51 people died, including five mine rescuers who went in search of miners. According to the latest data, 99 Russians have suffered – some of them have already been discharged from the hospital.

After the incident at Listvyazhnaya, President Vladimir Putin demanded that those who disregard the safety of workers in mines should be asked to “harshly ask according to the law”. putting them at mortal risk. He addressed the owners of “Listvyazhnoy” with the phrase “did they follow or count money?”.