Euronews: Pencils from which a festive tree grows on sale in Denmark 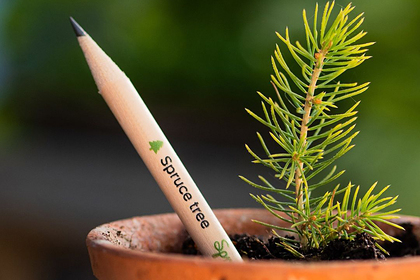 An unusual way to get a Christmas tree was shown in Denmark. Sprout startup has launched sales of pencils, from which, after grinding, Europeans can grow a festive tree, writes Euronews.

Writing instruments are made of environmentally friendly wood and have a non-toxic graphite core. A biocapsule with seeds was placed at the base of the pencil – after using it, you need to plant it in a pot with soil and take care of it like an ordinary plant. In addition to the Christmas tree, the Sprout line includes pencils with cherry tomatoes and several types of indoor flowers.

The company noted that 14 billion pencils are used annually around the world, for the production of which 82 thousand trees are cut down. However, these plants are important in the fight against global warming – they capture carbon emissions and release oxygen, as well as ensure the resilience of the ecosystem. To save trees from destruction, Sprout decided to launch a waste-free production of writing instruments and has already sold more than 30 million pencils in Europe and the United States.

Earlier in the Polish city of Tychy, Europeans were offered to receive free Christmas trees for returning used batteries. Thus, the local authorities decided to encourage the population to properly dispose of such waste. One holiday tree will be sold for 15 old batteries.