In the video, the model showed how her bones showed through, and her skin had a pale shade 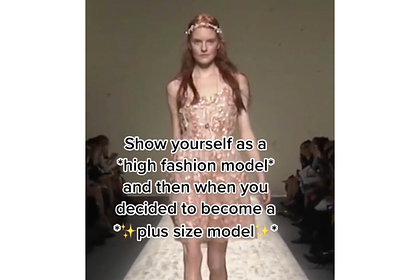 Blogger showed her appearance before and after working in modeling business and scared the fans. The video posted on TikTok was noticed in the Daily Star.

23-year-old Ronja explained that she developed health problems as a result of her career in the fashion industry as a teenager. Due to the fact that the girl needed to “fit” into certain parameters of modeling agencies, she adhered to various diets and suffered from a lack of weight. The footage posted online shows the outlines of bones and veins under Ronya's pale skin.

Leaving her former profession as a fashion model, Ronya decided to become a plus-size model. In subsequent photos attached to the post, she showed her appearance after refusing to starve. The pictures show that the girl gained weight, and her face became rosy and fresh. “Now I'm much happier,” she signed the post, which has collected 4.9 million views and 699.6 thousand likes.

Netizens supported Ronya in the comments below the post. “You looked very sickly. It's good that you are all right now “,” Now you look much more alive and radiant, I am glad for you. You are gorgeous “,” I respect you very much. I know how difficult it is to resist public opinion and fight for your happiness and health “,” It pisses me off that being healthy equates to being plus-size. You are damn beautiful, and I am happy for you, “the users wrote.

In November, former model Nikki Dubose complained of regular rape at work. The 36-year-old American admitted that the director of an undisclosed modeling agency regularly sexually assaulted her in exchange for collaborating with famous brands.