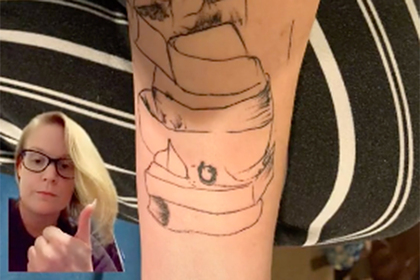 A US resident got a tattoo by an inept artist, shared the unsuccessful work result and became famous on the network … The corresponding video appeared on her TikTok account.

In the footage posted on the network, Holly explained that she had divorced her husband and decided to get a new tattoo on her forearm to ease the mental pain. She went to a friend of hers, with whom she had worked earlier. According to her, he has already done several drawings for her on her body, and she was pleased with the result.

For a new tattoo, the American chose an image in the form of a stack of books surrounded by flowers. Holly noted that when it came time to transfer the design to the skin, the artist began to behave strangely. “I came to his house in the evening, and for about an hour and a half we just talked about life. I played with the dog, he tuned the instrument, everything was fine. However, when he started to get a tattoo, I felt that his arm was moving back and forth, and then his head began to drop, “the girl shared.

Holly admitted that she was scared and asked the master if everything was all right. According to her, the man began to talk slurred and behave strangely. Then she decided to leave his house. “I was scared. I understand that I shouldn't have stayed that long, but I tried not to put myself in a situation that could escalate into something worse. In the end, I managed to get out of the house under the pretext of an emergency, ”said the American.

The girl noted that after the incident, the master tried several times to contact her in order to correct the unsuccessful work, but she decided that she did not want to see this person anymore. In the video, Holly showed the resulting tattoo: the frames show that the lines are chaotic and careless, and the drawing remained unfinished.

The video of the American went viral and gained 4.1 million views and 573.7 thousand likes. Netizens supported her in the comments below the publication. “Take this sick person to court”, “Please tell me that this is a joke”, “This is absolutely inadequate. Maybe he's a drug addict? “,” I sympathize with you. You'd better get rid of this picture. ” 23-year-old Amy Smith admitted that she got interested in tattoos at the age of ten, and she applied the first drawing on her body three years later. Later, the heroine of the material was presented with a tattoo machine, and she began to learn this skill. According to Smith, her appearance often grabs the attention of those around her.