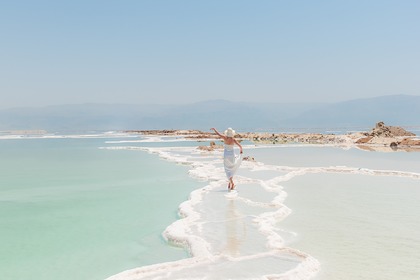 Russian tourist who visited Jordan told about the rest at the Dead Sea resort, in the town of Sauveima. The traveler shared her impressions of the trip with the portal “Subtleties of Tourism”. Her review was published on the Yandex.Zen platform.

A nine-day trip based on breakfasts cost 162 thousand rubles for two, however, the Russian woman noted that due to flights with transfers (via Sharjah), in fact, the rest took seven days.

The traveler also talked about some of the features of the resort. According to her, the Dead Sea is very salty and oily, and due to the density of the water, it is difficult to move in it. Among other things, the girl warned against swimming in a pond, even with small wounds or cuts, noting the danger to the body.

“Entering the sea, as elsewhere, is pebble, so take slippers. We really liked the sea. You can only be in it for no more than 15-20 minutes and immediately run under the shower. Since a white bloom appears on the skin in a couple of minutes, “the traveler added.

Another nuance noted by the tourist is the underdevelopment of public transport in the region. The girl said that it is better to travel around the area by taxi or as part of an excursion. “It is simply impossible to find out the schedule, as there is none at all. Sometimes two buses can pass in a row, and then for several hours there won't be a single one, ”the traveler complained.

In addition, the Russian woman advised to go on an excursion to Petra (and take warm clothes) and visit Bethany for Jordan.

Earlier in December, another domestic tourist, who was on vacation in Hurghada, revealed three popular schemes for deceiving travelers by local residents. The girl complained that the “divorce” of tourists begins immediately upon arrival at the resort.