Promobot, SMEs and SMEs Corporation Bank: a project to equip the National Bank of Oman with robots 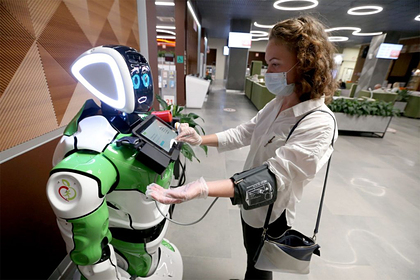 a project to equip bank branches of the National Bank of Oman with robotic consultants. To implement the project, which is being implemented as part of the Oman digitalization program, the company's production facilities were expanded. This was reported to Lente.ru by the press service of the SME Corporation.

Russian robots will advise clients, talk about the bank's services, answer questions, help fill out documents and applications, removing some of the workload from the staff. In Russia, Promobot robots with similar functionality are already working in MFC branches.

The project is divided into several stages. The robot has already started work and at the first stage will begin to perform the duties of a consultant. Three months later, the Bank's management evaluates the effectiveness of the product and decides on scaling.

“Russian Promobot is able to integrate with any external systems – so its functionality becomes almost unlimited. Thanks to this, the robot can replace any position in the bank – concierge, consultant, personal assistant or administrator. When a person needs to be taught each profession separately, the robot only needs to “switch the mode,” said Oleg Kivokurtsev, Development Director of Promobot.

Russian robots are already working on the Arabian Peninsula – in clinics in Kuwait, schools in Saudi Arabia, as well as in the largest shopping center in the world – Dubai Mall.

“We pay special attention to supporting high-tech companies. Promobot received support for expanding production at the stage of a startup project, – said Alexander Isaevich, General Director of the SME Corporation. – As a result, the Russian company supplies robots for export as part of the Oman digitalization project. By the way, the use of promobots in Russia is much wider. ”

The Promobot robot consultant is an autonomous service robot for business that completely replaces a“ live ”promoter. He can communicate with people, answer questions and advise, move freely in the room. Thanks to artificial intelligence, the promobot knows literally everything about the company – how to get there, where to buy, how to choose a product – and never forgets it.