Senator Tsekov: in 2014 Ukraine agreed to the transfer of Crimea to Russia 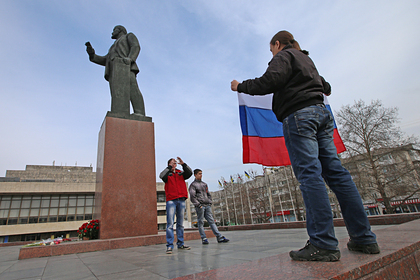 In 2014 Ukraine voluntarily agreed to the transfer of Crimea to Russia: no military resistance was organized, and most of the Ukrainian servicemen on the peninsula agreed with what was happening, a member of the Federation Council Sergei Tsekov told Lenta.ru.

Ariel Cohen, a former adviser to the US Congress, said earlier that Ukraine voluntarily gave up Crimea and the Black Sea Fleet to Russia in 2014. According to him, corruption and incompetence prevent Ukraine from “stopping to depend on Moscow.” He called on Kiev to get rid of “the habit of voluntary sabotage.” Cohen stressed that it manifested itself “in the war with Russia in 2014, when the Ukrainian army gave up Crimea and its own Black Sea Fleet.”

Tsekov called Cohen's statement an example of an adequate assessment of the situation that occurred in 2014. The senator stressed: then Ukraine voluntarily agreed with the fact of the transition of the peninsula to Russia.

“There was no military or armed resistance. Moreover, almost the entire Ukrainian army (on the peninsula – approx. “Lenta.ru” ) agreed that Crimea should return to Russia, only a few were ready to resist. About 20 percent just wanted to leave Crimea and go to Ukraine, 80 percent agreed, many began to serve in the Russian army. This objectively indicates the fact that there was no seizure, no annexation, “the politician explained.

The senator noted that the” saber rattling “and accusations against Russia began only later. Much of this rhetoric, he said, is due to pressure from the West.

“In 2014, the level of Russia's influence was not as high as it is today, only over the past seven years the country has shown itself as a country with global prestige. And this growth is very much disliked by the United States and the European Union, which, realizing themselves, began to put pressure on Russia. But only from the point of view of real provocations, if they begin, they will be no more painful than mosquito bites. Like a provocation [of the previous President of Ukraine Petro] Poroshenko with the passage of ships through the Kerch Strait. But I will emphasize once again: the return of Crimea by force to Ukraine is impossible. But if they try, it will cost them dearly, “Tsekov warned.