“Russian Spring”: special forces of the pro-American SDF attacked the Turkish military base in Syria 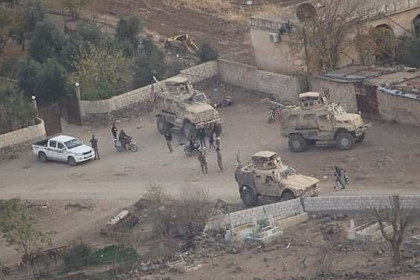 Militants of the pro-American Kurdish democratic forces ) infiltrated a Turkish military base in Syria and staged a massacre. This is reported by the publication “Russian Spring” close to the Russian Ministry of Defense.

According to the newspaper, the incident took place in the Al-Aziz area in the north of the country – in the zone where the Turkish military are conducting their operation “Peace Spring”, directed including against the Kurds. After the SDF special forces group infiltrated the base, a battle broke out between it and the Turkish military, which lasted about an hour.

How many people were killed and injured as a result of the clash is currently unknown. Other losses on both sides were also not reported.

At the same time, after the incident, the Turkish command ordered to organize a search for a group of Kurds who had staged an attack on the base. For this, in particular, the field commanders of the pro-Turkish “Syrian National Army”, who operate in the region, were ordered to put their groups on high alert.

As the “Russian Spring” specifies, the attack undertaken by the SDF could be a response to the Turkish military and pro-Turkish groups to the attack, which was previously subjected to the US Army convoy in the Tell Tamra area.