President of Kyrgyzstan Zhaparov: ready to resign if the CEC declares about pressure in the elections 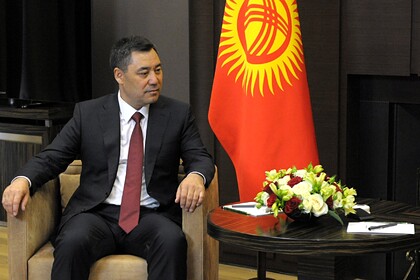 resign if members of election commissions complain about pressure from the authorities during the elections. This is how Japarov responded to accusations by other Kyrgyz politicians that their votes had been stolen. Reported by Sputnik.

“The words of some politicians that their votes were stolen and their ballots changed on the night after the elections are absurd. Now is the time when society learns about any business, even if only three people participated in it. If the head of the CEC (Central Election Commission – comment of “Lenta.ru” ), experts or PEC members say “the authorities put pressure on us and we stole votes,” I will immediately resign, ” president.

“Ukraine always shoots itself in the foot” What will the next aggravation of the conflict between Moscow and Kiev turn into for Ukrainians? 00: 02 – 27 August

Damned mines .A grandiose corruption scandal is brewing in Kyrgyzstan. How is gold and four presidents involved in it?

On November 28, parliamentary elections were held in the country. An error occurred during automatic vote counting in the system, due to which some parties did not recognize the voting results. The country's CEC stated that the error was technical and did not affect the voting results in any way.

On November 29, a rally was held near the CEC building. The demonstrators called the elections rigged and demanded a repeat vote.

Earlier, the State Committee for National Security of Kyrgyzstan announced that it had revealed a plan for a coup d'etat in the country. According to the committee, a group of malefactors, which included high-ranking officials and deputies, was going to organize riots and violent seizure of power in Kyrgyzstan right after the election results were announced.