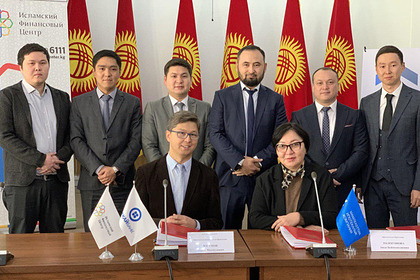 Citizens of Kyrgyzstan will soon be able to take out a loan for an apartment according to Sharia principles. Islamic mortgages will be launched with the financial support of the State Mortgage Company (GIK). This is stated on the company's website.

“Within the framework of this Agency Agreement, OJSC“ GIK ”plans to provide investment funds for the issuance of mortgage products according to Islamic principles of financing (IPF) to participants in the housing program through the Islamic Financial Center (IFC) of OJSC“ Bakai Bank ”,” the GIK of Kyrgyzstan reports.

Generation M. Muslim women burst into the world of fashion and changed it. How did modesty in clothes become a trend? 00:01 – October 3

“Do not forget who you are” Kazakhstan declared war on the Russian language. Why is he considered a threat to the country?

The “State Mortgage Company” is implementing a state program to provide citizens of Kyrgyzstan with affordable housing, in fact, money for the development of Islamic mortgage has been allocated from the country's budget. Now, Muslim Kyrgyz will be able to use modern banking services with special conditions, bypassing Islamic laws prohibiting the issuance of money at interest.

In some Telegram channels, the GIK initiative was criticized due to questions about the functioning of the new mechanism. “A fairly decent number of Christians live in Kyrgyzstan: Russians, Belarusians, Ukrainians, Germans, Poles and Koreans. Will their housing needs be taken into account? Or will a Sharia-compliant mortgage be available only to Muslims? ” – the critics argue.

In November, the main imam of the Moscow mosque, Ildar Alyautdinov, wanted to open prayer rooms for Muslims in the metro. In his opinion, this will allow believers to do namaz on time in a specially designated place. The metro did not listen to the ideas of the imam.