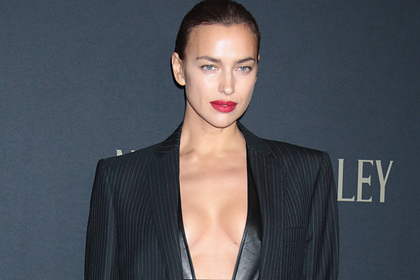 Russian supermodel Irina Shayk attended the premiere of the film Alley “In New York in a revealing outfit and was scolded on the net. Relevant photos and comments appeared on the Daily Mail.

The 35-year-old celebrity was released in a dark gray striped pantsuit combined with a leather top that partially exposes her breasts. Shayk complemented her look with black pumps with heels and a small bag. Her hair was gathered in a low bun, and red lipstick was applied to her lips.

Readers of the publication began to criticize the appearance of the fashion model in the comments under the article. “This woman always looks tired and rude. She chooses tasteless clothes “,” Dirty outfit “,” I like her, but this outfit is terrible “,” Irina is beautiful, but her outfit is too extreme. She should look more elegant and less naked, “they said.

In October, Irina Shayk starred topless and excited the fans. In the posted black and white footage, the 35-year-old celebrity poses topless in black leather leggings that turn into boots. Her hair is pulled back in a bun and her face is covered in nude makeup. It is known that in this form, Shayk advertised the shoes of the designer and co-founder of the Jimmy Choo brand Tamara Mellon.