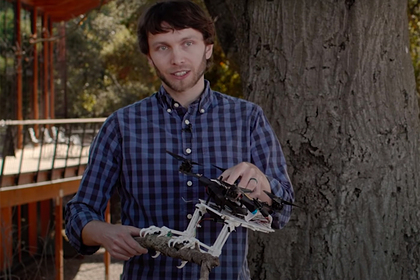 Stanford University specialists have created a robot that has paws for grabbing objects. This was reported on the organization's website.

According to scientists, when designing a robot, they were inspired by the abilities of animals. In particular, engineers have tried to recreate bird paws, with the help of which animals can grab and carry various objects, hold onto branches and push off objects at the start of flight. “After millions of years of evolution, they make it so easy to take off and land – even with a huge number of different trees in the forest,” – said project participant, Ph.D. William Roderick.

Scientist-created robot SNAG (Stereotyped Nature-inspired Aerial Grasper) consists of a quadcopter and 3D printed bird paws. Each paw has its own muscle and tendon counterpart, as well as an autonomous motor. The mechanism is used to absorb energy when landing and grabbing objects on the ground. Studying wildlife, engineers focused on parrots and peregrine falcons.

Enthusiasts noticed that almost all movements of small birds are stereotyped, that is, they consist of numerous repetitive actions.

Experts believe that SNAG can be used for wildlife and bird watching. Also, the drone can be used in search and rescue operations.

Earlier, American scientists discovered the ability to reproduce in the biorobots they created. Experts have noticed that when biorobots gather in groups, they can form spheres of about three thousand cells within five days.