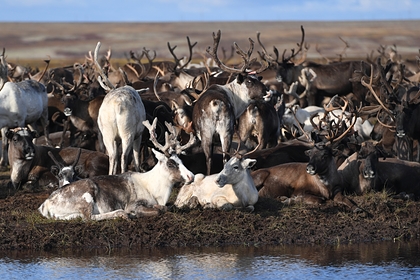 Frequent visits of polar bears to reindeer herders in Yamal global warming. This reason was put forward by scientists at the international symposium “Relationship of climatic changes with changes in biological and landscape diversity of the Arctic and Subarctic”, held in Salekhard, reports “Sever-Press”.

Researchers also admit that animals do not have enough food for familiar territories.

How global warming affects the landscape and biodiversity of species in Yamal remains to be seen, says Alena Levykh, head of the chemical analytical laboratory of the Scientific Center for the Study of the Arctic.

“According to the results of the study recommendations for practical application in the socio-economic life of the district will be formed, “she noted.

According to the Levs, glaciation has been observed in Yamal for several years in a row, which threatened a massive loss of deer. And in August and September, they noticed that polar bears began to more often go to the camps of Russian reindeer herders.

Earlier, the bear Skoda from the Chelyabinsk Zoo refused to hibernate. In the footage published on the network, you can see how the animal is trying to drag a large black ball up the hill. According to the zoo staff, the School finds other entertainment for itself.