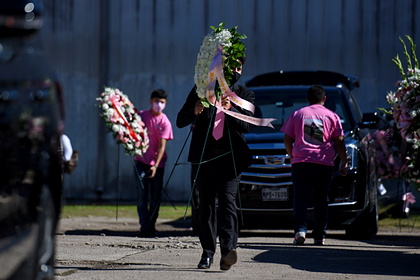 Five families of victims of the Astroworld crush. refused the help of rapper Travis Scott, who annually holds this event in his native Houston. This was reported by BBC News.

After the musician's concert, ten people died. He offered to pay all the expenses associated with the funeral, but the relatives of half of the victims said they would not accept money from Scott. Their lawyers believe that the proposed financial assistance from the artist is an attempt to reduce public pressure on him after the tragedy, and not a sincere expression of remorse.

“If he wanted to convince these families of his sincerity and Since he cares about them and understands that funerals are expensive, his lawyers have clearly failed this task. You are not mailing a piece of paper from a lawyer that says he represents Travis Scott. These families are crazy about grief, and such an impersonal approach is not suitable here, “said lawyer Philip Corboy, who represents the relatives of two people who died in the stampede.

The stampede occurred on November 5 at the Astroworld festival in Houston in rapper Travis Scott's performance time. It lasted half an hour, during which time more than 300 people were injured. Initially, it was reported that eight of the rapper's fans died from their injuries. They were between 14 and 27 years old. On September 11, it became known that 22-year-old Bharti Shahani had died in a hospital in Houston. Four days later, nine-year-old Erza Blount died.