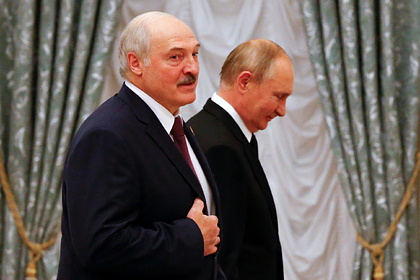 President of Belarus Alexander Lukashenko said that Russian leader Vladimir Putin said than a friend. He spoke about this in an interview with journalist Dmitry Kiselev, RIA Novosti reports.

“Once [the press secretary of the Russian president] Dima Peskov said very correctly. When I said that we have no friends in this world, journalists asked him the question: “But Lukashenko thinks …” Dmitry, he is great, he found something to say: “We are more than friends, we are brothers.” A brilliant answer, “Lukashenko recalled.

The Belarusian leader also noted that Putin considers him more than a friend. “We are brothers. But seriously, we see the world on the main issues in the same way. Yes, we can sometimes draw conclusions that are not quite the same, but our eyes see this world in the same way, ”he concluded.

In March, Lukashenka said that Belarus has no friends in the world. At the same time, at the end of October last year, the Belarusian president called his Russian counterpart Putin the only friend of the country.

The Kremlin, commenting on Lukashenko's statement, noted that his words hardly refer to Russia. “After all, we are in the same union state, and here, rather, we are not friends, but brothers,” explained Peskov.