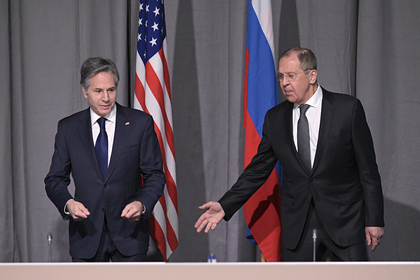 Russian Foreign Minister Sergei Lavrov during the meeting Blinken jokingly addressed the journalists present at the event. This was reported by RIA Novosti.

sanctions. Who makes these decisions and how? In particular, one of them concerned Washington's readiness to provide Moscow with legal security guarantees.

“Don't shout at us!” – the Russian minister said with a laugh.

The second face-to-face meeting of Lavrov and Blinken in a year took place on the sidelines of the OSCE ministerial meeting in Stockholm. Prior to that, the heads of the foreign affairs agencies met in May in Reykjavik during the ministerial meeting of the Arctic Council. The head of the Russian Foreign Ministry then called the conversation constructive, and his colleague said that Russia and the United States have a number of areas for cooperation.

On October 6, it was reported that Lavrov had addressed one of the journalists during a press conference. “We are kindly requested: when we answer questions, do not give interviews, as it happened now with some correspondent,” said the head of the Ministry of Foreign Affairs. It was not specified which reporter Lavrov turned to.