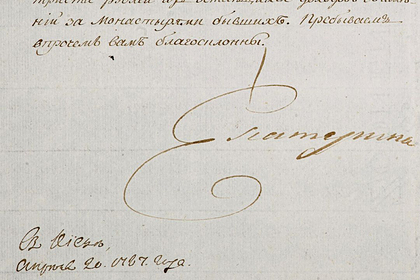 at the auction of the British auction house MacDougall's Auction. The information appeared on the company's website.

The event took place in London on Wednesday, December 1. It is known that a letter from Catherine II of 1787, in which she talks about the benefits of vaccination against smallpox, as well as her portrait, painted by the Russian painter Dmitry Levitsky, went under the hammer. It is noted that the creator has repeatedly depicted the Empress and her son Paul I on his canvases.

The initial cost of the lot, according to experts, ranged from 800 thousand to 1.2 million pounds (from 78.6 to 118 million rubles). Ultimately, the products were purchased for 951 thousand pounds (93.5 million rubles). The name of the buyer was not disclosed.

Representatives of the auction house called the letter a unique exhibit, since it is the first known historical document, which refers to a vaccination campaign in Russia. It is known that on October 23, 1768, Catherine II became the first resident of the Russian Empire vaccinated against smallpox, the epidemic of which flared up again in 1768.

In September, a personal item of the British Queen's sister was sold for 40 million rubles. This is a Cartier bracelet worn by a member of the royal family for a photo shoot at Buckingham Palace on the occasion of the 19th anniversary. It is known that the author of the mentioned picture is the photographer Cecil Beaton. The jewelry, dated 1925, is made of two rows of pearls and set with round diamonds.