A three-meter crocodile attacked a dog walking with its owner 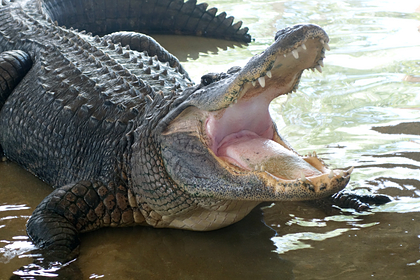 A dog in the city of Darwin in the Northern Territory of Australia survived an attack by a three-meter-long crocodile … This is reported by 9 News.

During a morning walk with the owner, a five-year-old Staffordshire Bull Terrier named Banjo played in the water on the beach. A combed crocodile attacked the animal from behind. The reptile bit the dog behind the back several times and disappeared.

“It was an ordinary life” She fled from Stalin, and he – from Hitler … Then they got married and killed thousands of crocodiles

The owner of the dog was amazed that after the attack the dog as if nothing had happened again went into the water. He took the pet to the vet. The technician treated the remaining three bite wounds on Banjo's back, but no stitches were required.

The dog is currently at home. After the incident, the local authorities set traps to catch the crocodile.

The combed crocodile is considered one of the largest predators on the planet. Males of this species reach seven meters in length and can weigh up to two tons. They are found on the eastern shores of India, in many countries of Southeast Asia, in Papua New Guinea and in northern Australia. Reptiles are especially aggressive during the mating season, which begins in September.

Earlier it was reported that in the Australian state of Queensland, a dog managed to escape from a combed crocodile chasing it. The attack occurred while the dog was playing in the water near the shore.