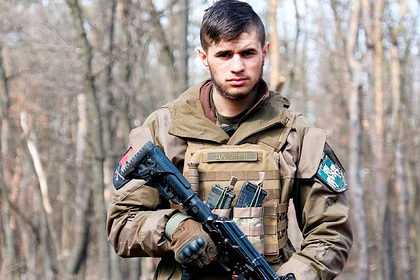 President of Ukraine Volodymyr Zelenskyy the medal “Gold Star” of the nationalist Dmitry Kotsyubailo, who joked about feeding the wolves with the bones of Russian-speaking children. This is reported by the portal “Strana”.

It is clarified that Kotsyubailo is the commander of the first assault company of the Ukrainian Volunteer Corps (DUK) “Right Sector” ( the organization is recognized as extremist, banned in Russia ) … According to the newspaper, he took part in the hostilities in the Donbass.

On April 20, 2021, the American newspaper New York Times published an article stating that the Kotsyubailo unit contains a domestic wolf in the city of Avdeevka. The wild animal was in a cage near the commander's office. “Commander Dmitry Kotsyubailo – Da Vinci's military pseudonym – jokes that the soldiers feed him the bones of Russian-speaking children,” the article said.

On Wednesday, December 1, Zelensky spoke in parliament with an annual message to the Verkhovna Rada. Then the presentation of state awards took place, timed to the 30th anniversary of the All-Ukrainian referendum on independence.