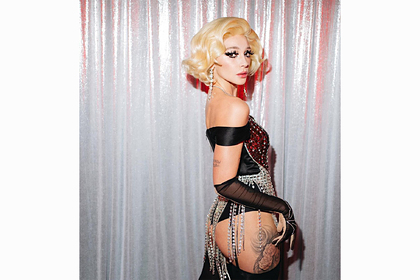 In a frame posted online, a 30-year-old celebrity poses sideways to the camera in a black satin bodysuit with a dropped shoulder line, embroidered with large red rhinestones on the chest. Her image was complemented by long earrings with precious stones, translucent gloves and stockings. The star's hair is loose and laid in waves, and bright makeup is applied to her face. It is known that in this outfit the blogger starred in the new edition of her own show “King Cobras”.

In addition, the TV presenter posted a few more shots from the shooting. They depict other heroes of the program performing on stage. The carousel contains both group pictures of participants and individual photos.

Netizens appreciated the appearance of Ivleeva in the comments under the publication. “Hot and passionate. An interesting combination “,” Pretty woman! “,” Your image is simply incredible “,” Holy woman, for this and from the roof I will jump “,” You can get burned. How hot you are, “they wrote.

Earlier in November, Ivleeva showed off her new hairstyle and sparked controversy among fans. The celebrity shared pictures from the ball, which is held annually by the fashion magazine Tatler in the Pashkov house. She posed on a marble staircase in a tight-fitting black dress with long sleeves and an open back. The footage showed that Ivleeva dyed her hair a dark color and made a bob haircut.