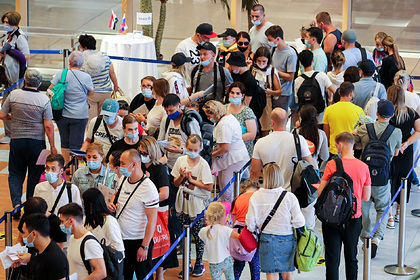 Hundreds of Russian travelers are at Hurghada airports and Sharm el-Sheikh and have not been able to fly home for more than a day. The portal “E1.RU” writes about this.

It is clarified that tourists are stuck in Egypt due to the massive cancellation of flights of Royal Flight. “We were supposed to take off on November 30 at 13:15 local time. First, the flight was delayed until 13:55, then information appeared on the online board that the departure would be at 23:00. Then [the flight] from Sharm el-Sheikh to Yekaterinburg was canceled altogether, “one of the passengers complained.

The woman added that seven hours after the flight was canceled, tourists were offered hot food and water. “When the departure is not known at the moment. Maybe in the morning. They do not want to move us into the hotel, what to do next, we do not know, “she said.

It is also reported that flights from Sharm el-Sheikh to Omsk, Chelyabinsk, Volgograd, Kazan and Orenburg have been canceled , as well as return flights from Nizhnekamsk and Volgograd. In addition, several more planes were detained. The reasons for the failure in the schedule were not specified.

On December 1, it was reported that hundreds of Russians could not fly out of the Dominican Republic on time and were stuck in the country for at least a day. As noted, the Russians were supposed to fly back on Tuesday, November 30, but it turned out that the plane did not arrive.