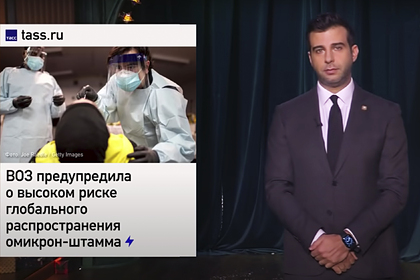 Worldwide The showman found common ground between the symbol of the Greek alphabet assigned to the new mutation and the famous Russian rapper Oksimiron (Oxxxymiron, real name – Miron Fedorov). Urgant's statements were heard on his show “Evening Urgant”, the release is available on YouTube.

In the program, Urgant called the omicron strain a new coronavirus update and asked his colleague Dmitry Khrustalev if he had downloaded it for himself. The showman ridiculed the similar sound of the name of the strain and the pseudonym of rapper Miron Fedorov – Oksimiron. Urgant also reminded that a new Oxymiron disc will be released on December 1, the first in six years.

“This news is definitely the hardest (about the emergence of the omicron strain – approx.” Lenta.ru “) took Oksimiron. For six years a man was preparing to release a new album, and then – again! – in two days a strain with the same name bypasses it, ”the TV presenter joked. Urgant expressed the hope that the omicron, instead of a new type of virus, will turn out to be just a mixtape of old, already known strains.

A new strain of coronavirus B.1.1.529, code-named omicron, was identified in mid-November in Africa … The World Health Organization (WHO) has named it omicron. WHO has also included this strain in the group of options of concern.

Earlier, doctor and TV presenter Alexander Myasnikov named the only way to protect against the omicron strain. In his opinion, in order to prevent the spread of the virus, you need to revaccinate.