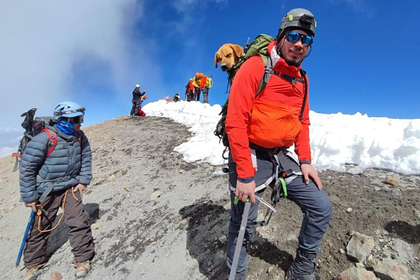 a dog that spent almost a month on the top of the mountain. This is reported by the Daily Mail.

On Sunday, November 21, seasoned climber Layo Aguilar, along with a group of 30 people, reached the highest peak in Mexico, the Orizaba volcano, in order to find and bring down a stray dog ​​along nicknamed Canelo. The dog managed to stay at the peak of the mountain for about a month, despite the low temperatures and snow.

In order to save the animal from the cold and safely lower it down, Aguilar put the dog in a backpack, which he carried in turn with two others group members. After returning, the emaciated dog was taken to the vet by car.

It is noted that the dog often accompanied groups of tourists who went to the ascent, and also fed the dog with food – so, once tied up too far behind the climbers, the animal remained on top and could not go down on their own. They are currently looking for new owners for Canelo.

Earlier in February, hikers in Ireland found a lost dog in the mountains and returned it home. It was reported that the dog was so weak due to frostbite that he could not move or bark. The travelers covered the animal with a blanket and carried it on their shoulders for ten kilometers, and then took it to the vet.