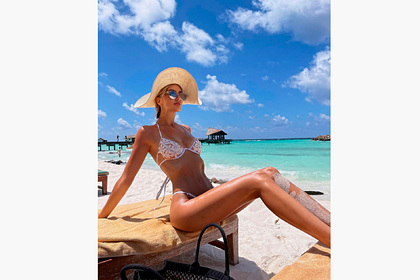 Miss Moscow 2015, Oksana Voevodina, showed fans several photos taken while on vacation in the Maldives. A series of shots appeared on her Instagram account.

The pictures show a 29-year-old model posing sitting on a sun lounger against the backdrop of the beach and bungalows built over the water. She starred in a white bikini with floral appliques, a wide-brimmed hat and sunglasses. In the description for the publication, which received more than two thousand likes, Vojvodina told a brief history of the Maldives archipelago.

Subscribers were delighted with the appearance of the king's ex-wife. “The best swimsuit, in my opinion, and the most beautiful smile! You are great! ”,“ Continue to anger the Sultan, ”“ A beautiful, real princess, ”they praised.

In September, Oksana Voevodina showed her child from the former king of Malaysia. In the photo, three-year-old Leon is captured in a black tracksuit, consisting of a tracksuit and pants, a red-brown puffy vest in a cage and a blue cap with a red visor. In the description, Voevodina talked about her way of raising her son.