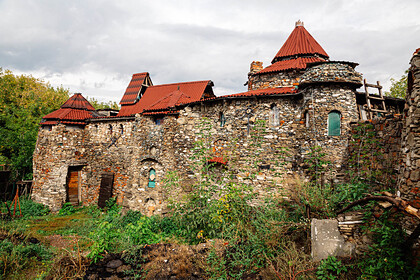 art objects of the country “Tutu Art”, which was launched on November 30. This is stated in the press release of the online service “Tutu.ru”, received by the editorial office of “Lenta.ru”.

In the next stage, nine objects from nine regions of the country will fight for victory – the Puppet Castle from Novosibirsk, a lock made of fittings in the Omsk region, a mosquito guardian of Siberia from Noyabrsk, a kissing throne from Khanty-Mansiysk, a pickup truck from an old GAZ-52 from Tyumen, a lucky rhinoceros from Syktyvkar, a boiling cauldron from the village of Ustye, Nenets Autonomous Okrug, a bath-ship from Kemerovo and painted residents from Tomsk. Voting will last until December 6 on the official website.

A total of 85 unusual art objects will participate in the competition, one from each region of Russia. They were divided into 10 rounds of eight and nine participants each. The winner of the competition will be announced on January 24, 2022.

It is noted that this is not the first annual competition held by Tutu.ru. In 2018 and 2019, as part of the popular vote, the Russians chose the settlement with the funniest name, and last year an encyclopedia of 100 of the country's most unusual monuments with their 3D models was compiled.

Earlier in November, the finalist was announced the sixth round of the All-Russian competition for the most unusual art objects of the country “Tutu Art” – it was a mammoth made of iron in Magadan. The sculpture won 50 percent of the votes of netizens, the second place was taken by the Kingdom of Stuffed Toys in the Sakhalin Region (12.9 percent), the third – the Cathedral of St. Basil the Blessed and the Kremlin at the dacha in Khabarovsk (12.4 percent of the votes).