Samsung has released three processors for installation in cars 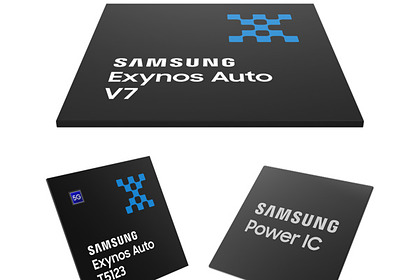 Samsung has announced two new processors and one chip designed specifically for cars. This is reported on the company's website.

Exynos Auto T5123 in the corporation called the industry's first solution for autonomous network connectivity via 5G. The chip is a 3GPP Release 15 telematics control unit that operates in both autonomous (SA) and non-autonomous (NSA) modes. The device allows you to output data transfer rates up to 5.1 gigabits per second. In particular, thanks to the new interface, you can enjoy high-definition video calls while driving.

ExynosAuto V7 consists of eight Arm Cortex-A76 cores and 11 cores of the Arm Mali G76 GPU. The processor, among other things, is focused on installation in unmanned vehicles: it allows you to connect up to four displays and 12 camera inputs. The model also features an isolated security processor for cryptographic operations.

The S2VPS01 chip regulates and straightens the flow of electricity to ensure reliable operation of the infotainment system in the vehicle. Samsung said the equipment supports protection against harsh thermal and electrical conditions, short circuit and overcurrent.

At the end of September, Samsung activated a digital key to start cars for a range of smartphones. In particular, support for a new unlocking method appeared in the Genesis GV60 electric car.