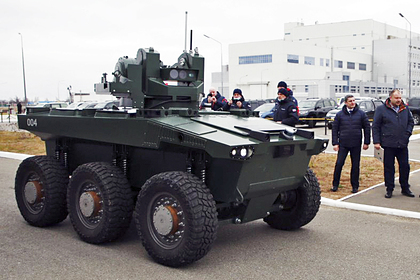 “As part of the acceptance tests of the platform “Marker”, the robot confirmed the declared characteristics of overcoming obstacles, including overcoming a ford with a depth of more than 0.8 meters, “said the candidate of technical sciences.

In October, the NGO noted that the main advantage of the” Marker “is high speed of rotation of the payload module (up to 400 degrees per second) and positioning accuracy.

The robotic platform “Marker” is a joint project of the FPI and the research and production association “Android Technician a “, which developed the product Final Experimental Demonstration Object Research (FEDOR), which flew to the International Space Station in August 2019. “Marker” must be able to work with small arms and destroy ground and air targets, and will also receive a grenade launcher. In the future, the device will be able to be equipped with drones.