The head of the Ministry of Internal Affairs of Ukraine: the security forces are able to quickly repulse illegal migrants 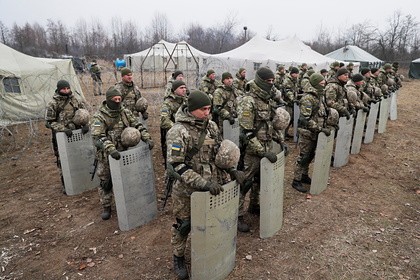 Ukrainian security forces are able to promptly repulse illegal migrants in case of their with Belarus. This was stated by the head of the Ministry of Internal Affairs of Ukraine Denis Monastyrsky, the press service of the department reports on Facebook.

He spoke about the special operation “Polesie”, which is taking place in five regions bordering on Belarus, and threatened illegal immigrants with an immediate reaction of Ukrainian law enforcement officers to any attempt to illegally cross the cordon.

“During the exercise, we saw that all units of the Ministry of Internal Affairs are a real fist that can ensure the internal security of Ukraine. A few weeks ago there was a completely different picture here. And today we are convinced that in 30-60 minutes after the intelligence provides information on the inflow of migrants, our units will be at the border, “- said Monastyrsky.

The Minister explained that in case of illegal immigrants getting to Ukrainian territory, the border guards will be the first on the spot, after which they will be joined by the police and the National Guard, who will be “fully prepared to fight back in the event of illegal crossing of the state border.”

Earlier in November, the State Border Guard the service of Ukraine announced the beginning of the special operation “Polesie” on the border with Belarus in order to prevent the aggravation of the situation with illegal migrants. The maneuvers are carried out jointly with the police, the National Guard, the Armed Forces of Ukraine (AFU) and other involved reserves.