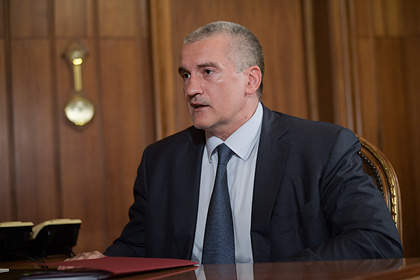 The Kiev Court of Appeal allowed to detain the head of Crimea Sergei Aksenov. This was reported by the press service of the court.

It is noted that on November 25, the panel of judges satisfied the appeal filed by the prosecutor against the determination of the Shevchenko District Court, and granted permission to detain Aksenov with the aim of further choosing him a preventive measure. At the same time, in the court's message itself, the official's name is not indicated in full, but appears only in the form of an initial.

In Ukraine, Aksenov is suspected of committing a number of criminal offenses. In particular, he is charged with committing actions aimed at violent change or overthrow of the constitutional order, or seizure of state power, encroachment on the territorial integrity and inviolability of Ukraine, creation and management of a criminal organization, as well as participation in it, committing a terrorist attack, blocking transport communications and the seizure of state or public buildings.

Earlier, Aksenov called Ukraine a terrorist state and accused the “provocateurs” from the Mejlis of the Crimean Tatar people (banned in the Russian Federation) of participating in a hybrid war against Russia.