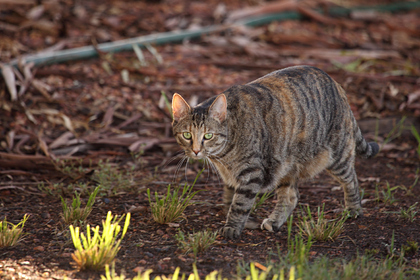 a natural habitat that helps control wild felines, reported on the University of South Australia website.

In European countries, wild cats are threatened by the destruction of their habitat, as well as mixing with domestic cats. In Australia, the situation is the opposite – wild cats do not have natural enemies there, in light of which they harm the local ecosystem. “Small mammals, similar in size to typical cat food, are most at risk, especially terrestrial inhabitants such as short-faced kangaroos and rabbit bandicoots,” said one researcher.

A poisonous implant the size of a grain of rice, which has begun to be implanted under the skin of vulnerable Australian animal species. The development itself is not harmful to the animals into which it is implanted, but the poison is activated directly in the stomach of a wild cat, after it eats its prey. For these purposes, scientists catch potential victims of a wild cat, insert an implant into them and release them back into their habitat.

Previously, scientists from the University of Exeter found out what role hunting plays in the life and nutrition of cats. According to British scientists, the vast majority of cats' diets (96 percent) consisted of homemade food. Wild animals accounted for only 3-4 percent. According to one of the researchers Martina Cecchetti, if cats have food from their owners, then they eat almost entirely on it. As a result, scientists concluded that it is not hunger that makes animals hunt, but instinct.