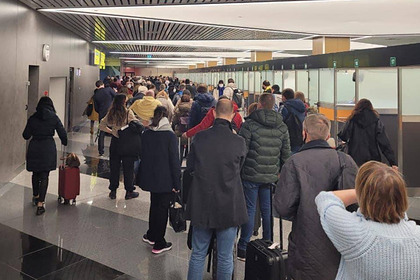 wait for several hours in line for testing for a new strain of coronavirus. Information about this appeared on the Moscow 24 Telegram channel.

The photographs taken by one of the eyewitnesses show giant queues of tourists arriving from London. It is noted that vacationers arriving from the UK are forced to undergo a study on COVID-19 due to the detection of the first cases of infection with the omicron strain in the kingdom.

Earlier on November 27, Prime Minister Boris Johnson announced stricter entry rules for foreigners. He noted that the United Kingdom will introduce a mandatory PCR test for all travelers entering the country. According to him, travelers will also have to be in self-isolation until the test result is received.

The first cases of infection with the new variant became known on November 24. Then there were reports of dozens of people infected in South Africa, Botswana and Hong Kong. British scientists have suggested that the new strain will be better at evading antibodies than the delta variant.